The Invisible Apple That Caused a Disruption

Embark Cider has been releasing it’s Dreamcicle series, a cider made with their farmhouse blend of apples and fermented with milk sugar, fresh peaches, apricots and raspberries. 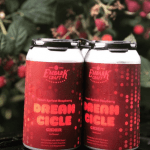 When Embark is in full production, the machine is running non-stop. A halt to production would cause a serious setback.

When cider-maker Chris Gowan called to say the elevator was jammed, the service team (department) at Juicing.Systems knew it was time sensitive.

“I called him because our elevator had stopped. We were in mid run of pressing so if we had to wait for somebody to call back, we would have had to clean everything and stop what we were doing, and change production plans. It would have really screwed things up.”

When Chris called, he was directed to open the electrical panel. The Variable Frequency drive was between 20 and 25 Hz, so by process of elimination it was determined that it must be mechanical. 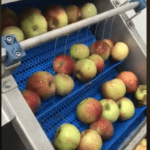 He was then told to look at the top, around the bend, and a big apple was found!

“It ended up being an apple stuck in the top between the paddles. It’s something I would have never thought of, (if you don’t know to look for it), because I couldn’t see it.”

With the problem resolved, Chris went back to production, to continue creating the delicious ciders he’s been making.

We understand that when production stops, it’s costly. Our service team is available to help.

If you have a technical question about your machinery or you are experiencing an issue, you can now submit a service ticket through the chat button on our website!

2018-11-20
Previous Post: From Rack and Cloth to a Single Belt Press
Next Post: Yields of a Belt Press