How A De Stoner Changed The Face of A Distillery

Ever wondered what life looks like after purchasing equipment, like a De Stoner, from Juicing.Systems? Look no further as we interview Robin Felder from Monte Piccolo and his journey of fruit distilling and introducing a brand new unique line of Varietal Gins™.

Located not far from Monticello in the picturesque foothills of the Blue Ridge Mountains, Monte Piccolo Farm and Distillery is the newest distillery to open its tasting room showcasing Eau-De-Vie fruit brandies made with a Kreuzmayr De-Stoner.

Monte Piccolo means “tiny mountain” in Italian. The name is referring to its relative size when compared to Monte Cello (small mountain) where the United States third president, Thomas Jefferson, built a home in Virginia which is referred to as Monticello. The initial fruit orchards were started in 2003 with the planting of apple, apricot, and Burford pear orchards. Monte Piccolo Distillery was started in 2009 and completed in 2017.

This is where the idealistic scene of brandy making ends. 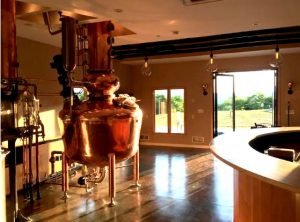 A De-Stoner and A Scientist: An Unlikely Marriage

Robin Felder is no ordinary distiller. With a background in robotics automation and biochemistry, he has refined his distilling processes down to an exact molecular science. He is a highly recognized Professor of Pathology at the University of Virginia as well as the Associate Director of Laboratory Medicine. His areas of research at the University of Virginia are broken into two sectors; automation and hypertension. More specifically, his work in medical automation has spurred over 150 publications of papers, reviews, and chapters. Robin’s research has been recognized and received many awards such as the Manitoba Society of Clinical Chemistry Lectureship Award, Engelberger Award for Leadership in Robotics, and The University of Virginia’s 1st Innovator of the Year. His studies in hypertension have also provided insights into key genetic and molecular pathways responsible for salt sensitivity.

Currently, he is investigating methods to measure molecules in the distillation vapor immediately as it emerges from the rectifying column of the still. Robin combines this methodology with the cutting edge technology, invented by a fellow colleague, of a Fast Fourier Molecular Rotational Spectroscopy (FFMRS). With this new technology, it has the potential to “revolutionize the distilling industry.” Having access to this data would allow distillers to distinguish concentrations of which offensive compounds are emerging as well as what pleasant esters are derived. To take this a step further, if one can pinpoint the exact flavor profile of award-winning brandies, it would be a matter of adjusting one’s brandy to match that of a highly sought after flavor profile. Now that Robin had been successful in extracting what molecules were essential to make award-winning brandy, it was time to get his brandy from a chemical compound on paper to a live product. At the beginning of Monte Piccolo, everything was done by hand. This was Robin Felder’s way of describing his process preparing the peaches for the still before his purchase of a KEP 650 De Stoner:

“I was cutting 2000 to 3000 peaches by hand just getting the stones out and shredding the rest of it. It was painstaking and it took hours and sometimes days. I said there has got to be a better way.”

That is when we were destined to meet. Robin had done some investigating into what machinery would be suitable for his operation. “The market is flooded with things you can buy 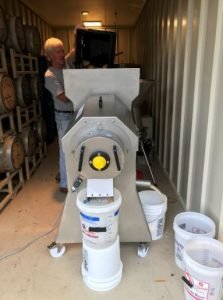 for $50,000 and it has the same general technology but it’s too big and too expensive and not portable. I needed something a lot less expensive than I can roll it around and tuck it away when I don’t need it… And then you’ve (Juicing.Systems) got a unique niche, I think, in terms of size of the equipment and also the quality. The fact that it’s made of really nice stainless steel you could practically leave it outside!”

Now, something you might not know is our equipment is not just strictly for cider makers! Monte Piccolo had a yearly production of 10,000 pounds of fruit and  Robin knew processing manually just wasn’t the best use of his time.

That is when the hunt for the perfect machine began. He found many machines with a similar purpose but were either too small or much too large for his scale of production. His other conundrum was only having access to a single phase 220 V. Some larger machines need three-phase power to operate while our Kreuzmayr can be customized to suit unique needs. Then, like Goldilocks, Robin came across our De-Stoner and was quite pleased and declared, “It’s perfect!” Okay, we may be slightly improvising here but you get the sentiment. Upon arrival and set up, Robin’s production transformed from hand cutting a few peaches per hour to 1500 lbs per hour! That’s a lot of peaches!

Finding the right equipment can completely change a business’s output and overall operations. For Robin, these include increased efficiency which ensures yields are as high as possible, getting the most from each pear. Contrasting this to cutting up pears manually, there is much less lost to waste and overall product output is increased.

It also decreased labor hours for him, with less time spent on manual labor as the machine now takes care of it. De-Stoners can be operational during the winter months allowing his operation to be in production throughout the offseason. Robin was interested in our De-Stoners as much of the fruit being distilled has either a stone or pit such as blood peaches, peaches, and apricots.

How did this help Robin?

“Remarkable! The De-Stoner just ate them as fast as you could throw them in!” Eliminating manual labor is a common factor with the De-Stoners as they reduce labor hours. Now that Robin had more time on his hands he was able to put his focus on writing scientific distilling grants and making award-winning brandies. His latest project is distilling varietal gins. In liquor stores, typically there is only a generic gin with juniper flavors from which no one knows which species of juniper was used as the source. Robin is working on the trademark of ‘Varietal Gins’™ to showcase different gins that highlight different species of the juniper source. It will have the Latin name inscribed on the label with the botanical drawing from a botanical specialist on the inside of the label so you can see it when you look through the bottle. Pretty neat eh!? 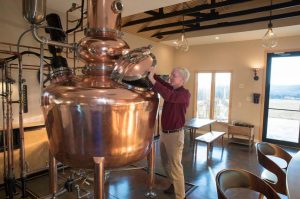 Keep up with Robin and his latest adventures on his website here: https://www.montepiccolo.com/