From Rack and Cloth to a Single Belt Press

Andrew Hefele was featured in Cider Culture as part of the history of cider making and his experience with the latest technology. We thought we would get a more in-depth look at what that transition was like changing from a rack and cloth system to a Kreuzmayr Single Belt Press for Andrew Hefele of Knaebe’s Mmmunchie Crunchie Apple Farm and Twisted Roots Cider, (as you can tell by their name, they have a lot of fun on their farm.)

Andrew Hefele has accomplished a lot in 4 years since taking over the family orchard. He’s now running a successful cidery, Twisted Roots Cider, producing 36,000 litres a year, and has changed the family farm by growing new varieties of apples, attracting a younger crowd, and having a lot of fun with it.

When Andrew took over the family orchard he faced a dilemma. The orchard was small and they distributed their apples at the local farm market. Andrew was seeing that a third of the crop would just fall to the ground unpicked at the end of the year. “No market for them,” he said. “I realized that pruning, watering, spraying, mowing were substantial costs and I had to either find a market for the apples or yank out some trees.”

Deciding to go the hard cider route not only saved the orchard, it has transformed it in many ways.

“We now utilize our entire crop,” he says. “The hard cider also opens up our farm to an entirely different customer. Younger customers who tend to spend more.”

As many businesses discover, growth comes with its’ challenges. Solving the dilemma of fruit loss only created another concern. Andrew was using a rack and cloth press and finding five employees to work a long gruelling day pressing cider was starting to get difficult. When working with the rack and cloth press, the pressing had to take place during a small window when the apples were ripe.

Using a rack and cloth press is much like folding laundry. The cloth (called a cheese) is filled with pomace, a frame is set on top, and this is repeated until the stack is high enough to be squished between the press. If the fruit is over-ripe, the pomace will explode through the cloth. In addition to the intensive labour, when Andrew stepped away the whole process stopped.

Andrew went looking for a better solution, one that would transform his operation to be more efficient, less labour intensive and more flexible, widening the window where he could press his fruit.

Moving from a Rack and cloth press to a Single Belt Press, Andrew found a way to address his labour woes. “On smaller press days I do it myself now. Or, if I have someone else helping I can step away and deal with other issues at the farm,” he says. “It takes about half the time now with the new press, and with two people vs. five. A 4,000 liter press takes us 6 hours with cleanup vs. almost 12 before.”

Finding the right equipment can revolutionize production for a cidery like Twisted Roots.

With the progression of technology, Kreuzmayr offers specialized equipment suited to hard cider makers like Andrew who want to modernize their production, to suit their budget, size requirements and production needs.

Andrew upgraded his operation with a Kreuzmayr KEB 500 Single Belt Press, a GKE Bin Tipper and a KWEM 1000.

The Bin Tipper effortlessly places the apples into the elevator/washer/grinder, the belt press then moves the pulped fruit through a series of rollers, extracting the maximum amount of juice, quickly and reliably. 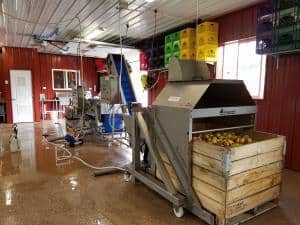 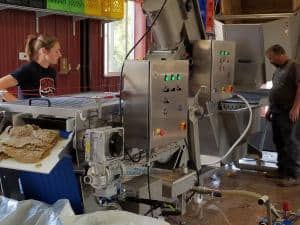 The excitement has changed for Andrew, from the days of anticipating apple explosions in the cold, to a more laid back, relaxed schedule of pressing.

“I primarily press in the fall, but I do a big hard cider press in February too. Which is crazy, because it was -30 C this last year when I pressed. I couldn’t do this with the rack n’ cloth. The cloths would clog up.”

A New Life to the Orchard To produce the cider and get the crisp flavours he is looking for within the cider he’s changed the varieties of apples he grows.

Of the changes made to the orchard, and the change in focus, Andrew believes it has brought life back into an aging industry.

“We tend to market the hard cider more than the traditional u-pick orchard. The margins are bigger and it attracts a younger fun crowd.” Twisted Roots sponsor events such as the Twisted Roots 5k and have bands play occasionally on the weekends . The name ‘Twisted Roots’ demonstrates how interwoven our lives can be. When we cross paths with someone new, we often find we have acquaintances in common, as we refer to the six degrees of separation. Twisted Roots mirrors this – as the family has it’s own interwoven history. Andrew’s wife, a relative of his stepmother, was two degrees away from him in the pathof meeting. The Entrance to Twisted Root displays a cedar root, demonstrating this connectedness.

And now, we all have yet another reason to connect, and that’s over a glass of hard cider at the Twisted Roots Cider tasting room.