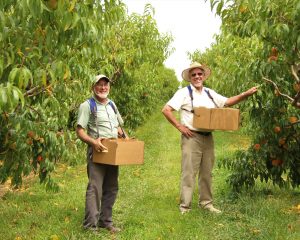 Our clients are smart cookies. They work hard to get optimal results, with research into procuring equipment that makes sense not only operationally but financially as well. We got the opportunity to work with a fruit farm that values smart business decisions. They are forward-thinking innovators in their field. They describe the balance of maintaining tradition while encouraging creativity and inventive thinking perfectly, “We love to look back on the old-fashioned days and ways of doing things, but we also plan to keep going, learning and growing as we combine the bits of the past with the vision for tomorrow,” (Kauffmans Fruit Farm, n.d.). Read more about their contemporary farming practices here.

They also take this unique mindset into their research of capital investments and expenditures. However, first, let us properly introduce them. 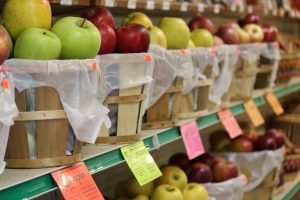 Kauffman Fruit Farm, enter stage left. This family-owned fruit farm put down roots in 1915, planting the first of many apple trees on a bedrock of family values. Their purpose? To keep food on the table and provide their children with employment opportunities.

Fast forward 106 years later, the Kauffman Fruit Farm is rooted in their family first mentality, forged with the three pillars of their foundation. These are “Be fair; a full measure, heaped and overflowing. Be kind; build a business on the strength of having good neighbors, and being good neighbors. Be visionary; establish a business that could provide work for family, and those that lived around the Kauffmans,” (Kauffman’s Fruit Farm, n.d.).

At the start of their commercial cider production days, they started with a Squeezebox style press that involved filling press bags and cleaning them out after each cycle. These proved to be a great solution until their cider was in such demand that their press schedule was no longer economical.

The shifts required to make the amount of sweet cider to keep consumers happy was 12 hours plus clean up. Due to the amount of press bags, clean-up would often take approximately four hours. This type of labor was just too taxing on the staff for the Kauffman Fruit Farm to keep asking of their team. They felt that their commercial cider production equipment was not operating to its maximum efficiency.

The input of labor they were committing to was too great to be a viable way to sustain future growth so Kauffman’s Fruit Farm knew they had to do something.

They knew they needed equipment that allowed them to easily produce more of their sweet cider without the addition of more labor or time.

The head of production at the farm, Kevin Hoober put it succinctly, “[their previous commercial cider production machines] were great for what we had for years and then we just decided based on the amount of labor they take, plus the square footage they took and the amount of time it took to get the amount for juice we make in our busy season, we decided it was time to start looking at something else.”

That’s how they found us.

After evaluating their situation and determining the volume they needed to produce, Kauffman Fruit Farm invested in a Kreuzmayr KEB 1250 Pressing Line.

One of the biggest surprises they found with their new purchase was the “lack of interaction” with the press. The biggest takeaway from their purchase, however, is the tremendous amount of time they were able to recover.

This is how Hoober described the change they have seen in their operation since implementing their new pressing to, “The amount of labor we are not doing on the press, not cleaning out each bag every time. So there’s that, but that also means we can run faster so we’re actually pressing more gallons per hour than we were in the past. Moreover, with this one press, we are doing what our two old presses could do at max speed for an entire day. So that’s saved us some time and clean up too, it’s just made our days not near as long especially in our busy season. It used to be that we started at a terribly ungodly hour in the morning but now the earliest they start is 5am. Which is I don’t know if they’ve ever started that late on a day when we need 4000+ gallons. Oh ya, we used to start at 2am. When you’re pressing 8000 gallons three times a week, 6000 another day. And when you can only do 800-850 gallons per hour, going as hard as you can, the days get long and then two hours clean up.”

Now, let’s say you want specifics. You like examples with numbers. Fair enough! So how did Kauffman’s everyday operation change?

The nitty-gritty details are what you’re really here for, right? You want to know exactly how much time and labor that Kauffman’s has recovered. Moreover, maybe this is something you’re interested in for your own operation.

This is how Kevin describes it, “The sheer speed that we can run at; when we had the old presses, we had a hopper under the shredder that could basically hold 80 bushel (3200 lb) of shredded apples. It used to be that we could cull and fill that before the press needed it. You could do that and some other things and come back and fill it back up. Now with this press (KEB 1250), we can barely keep it a quarter of the way full; which goes to the sheer speed of the press which is great.”

Watch it in action!

Investing in equipment has allowed Kauffman Fruit Farm to think bigger than before. That is what gets us excited to work with our clients. They’ve got big aspirations and investing in efficient equipment has allowed them to turn these ambitions into possibilities. Kauffman’s Fruit Farm’s big goal “is to supply the entire East Coast.” Now, that’s what we’re talking about!